Why you should have a dutch oven in your camping kit 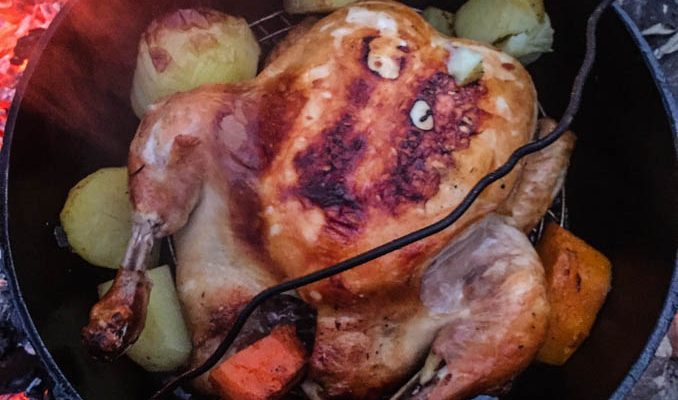 Articles + tips How to articles

Camping doesn’t mean eating poorly.  Even though we are technically roughing it when we leave our home and head outdoors, we are firm believers that we don’t have to rough it when it comes to food.  If you have a dutch oven, cooking becomes a very simple and amazing food and camping experience.  A little bit of forethought and planning allows us to buy food and ingredients that are appropriate for cooking in a dutch oven.

There’s nothing better than sitting back, watching your meal cooking in such a basic piece of equipment.  The noise of spitting and sizzling inside the oven only adds to the excitement of the future meal.  Before long, the smells emanating from the pot start to put you in the zone and the level of hunger rises within.  Even if you didn’t feel hungry when you started, it’s hard to not be consumed by the incredible aroma.

The best thing about dutch ovens is that they cook so very quickly.  Whole pieces of meat, roasts and chickens can cook in around 40 minutes.  Vegetables, roasted alongside, can cook in half the time.  If I could use a dutch oven to cook in my own kitchen at home, I would do so, such is the quality and speed of cooking.

Everything comes out perfectly cooked, tender, soft, crunchy on the outside.  It’s food to die for and you can be eating like kings out in the great outdoors. 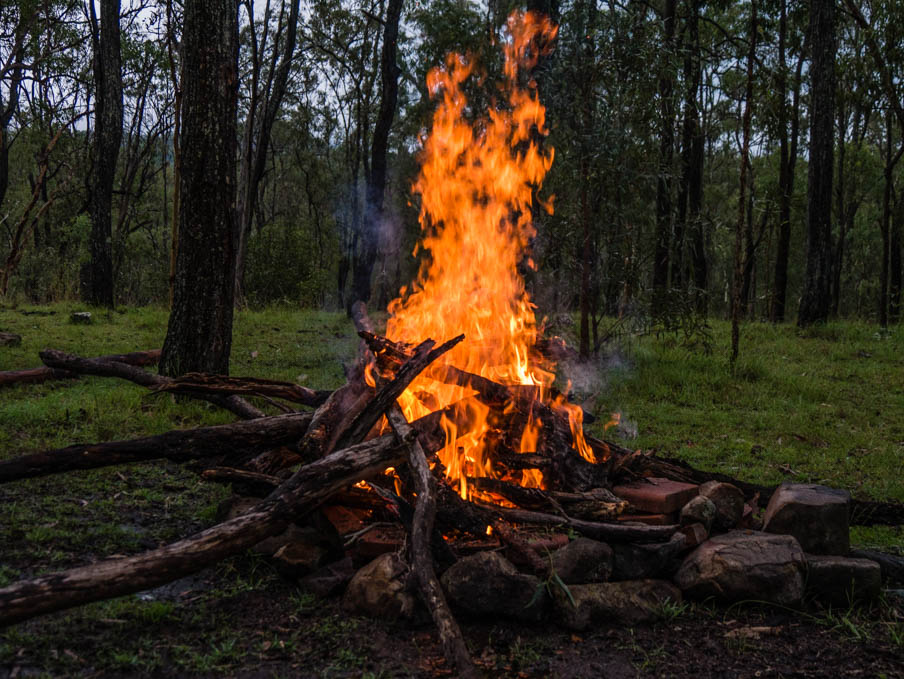 Cooking a chicken in a Dutch oven on the campfire can take as little as 40 minutes, depending on the size.  When cooking a piece of meat in the dutch oven, we always put a stainless steel rack or trivet on the bottom to stop it from sticking.

Tip:  You can put a rub all over the chicken to increase its flavour.

It also allows the juices to run more freely around the base which provides a perfect spot to cook the vegetables.  Once the chicken has cooked for about 20 minutes, we add the vegetables.

Every 10 minutes we move the vegetables around.  To get the chicken brown on the top, we simply place coals into the lid and it cooks on the top as well as the bottom. 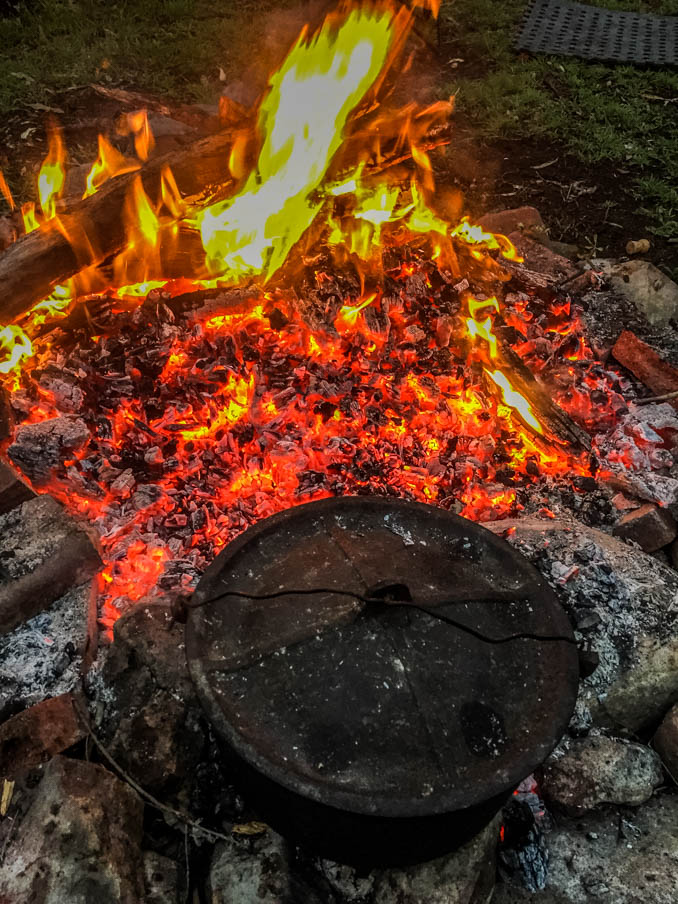 A beautiful roast chicken ready to eat.  All it needs now is a bit of gravy!  Cooking roast lamb in a dutch oven is also something that can be easily substituted. 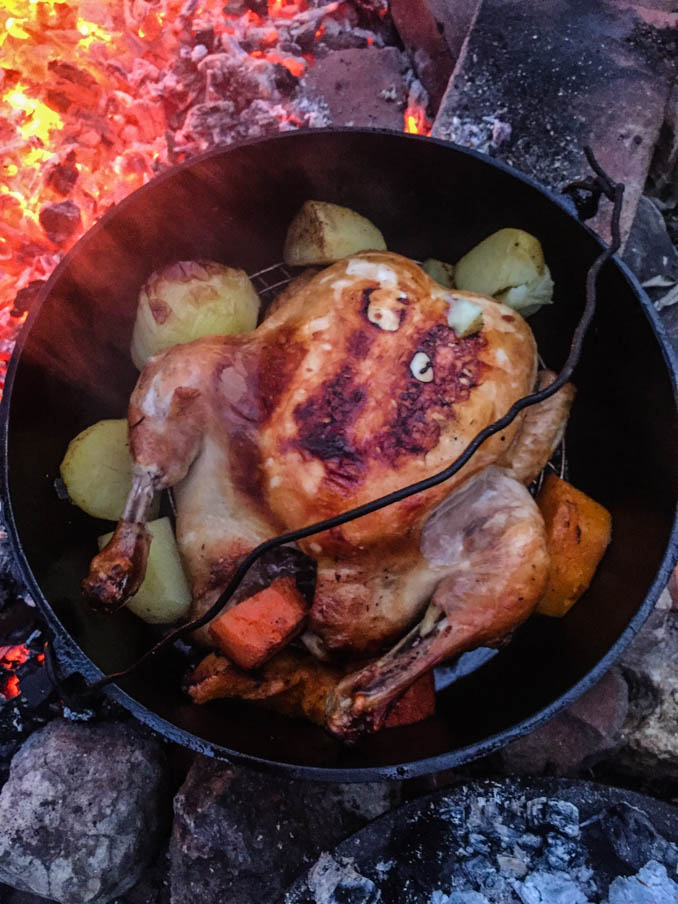 What are Dutch ovens made from?

Whilst there are dutch ovens made of different materials, we swear by our cast iron one.  They are so strong and durable, ours has been handed down from a family member who used to use the oven when he was working as a surveyor.  The cast-iron ovens spread the heat load more evenly and have an amazing ability to generate the heat quickly to start with and then retain.  Food can keep cooking in the cast iron dutch oven long after you’ve removed it from the heat source.

Food will retain its heat for longer periods of time.

In the Us, these ovens are called Dutch ovens mainly.  this has said to have originated from the introduction of this equipment from The Netherlands (or Holland as it would have been known back then).  Australians particularly call these camp ovens, for obvious reasons, but the name can vary depending on where you are from.

More reading: A perfect recipe for  Cooking in an Instant Pot in your RV

Features of a Dutch Oven

Accessories to help with cooking in a dutch oven

Here’s some of the basic equipment you should also consider having in your camping kit when using a dutch oven.

Ready to buy your Dutch Oven?  Check these out.

Cheap road trip – 9 tips to keep you on budget “Best Camping Toilets” is a participant in the Amazon Services LLC Associates Program, an affiliate advertising program designed to provide a means for us to earn fees by linking to Amazon.com and affiliated sites worldwide.